“The Spirit of God made me and the breath of the Almighty has given me life.” Job 33:4 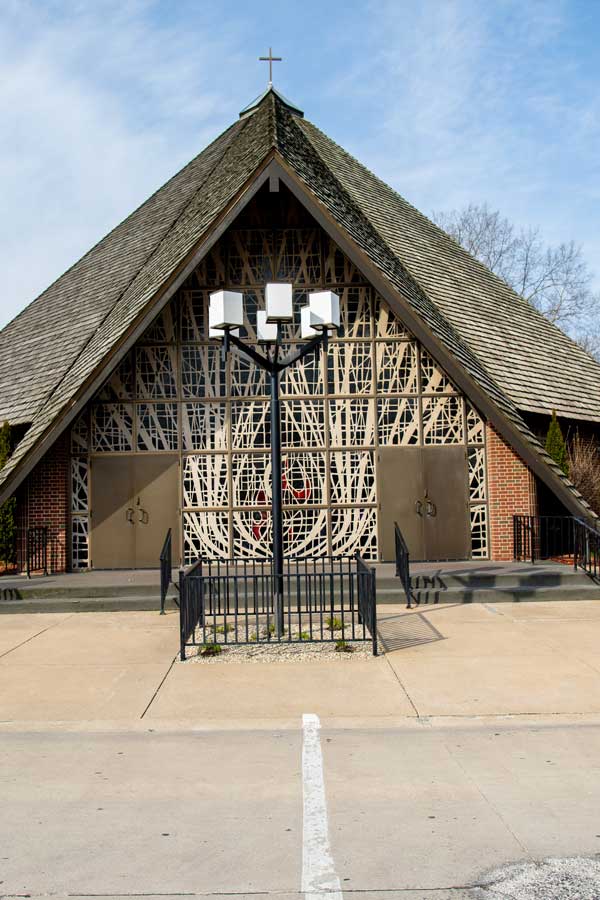 In 1883, a group of German-speaking Catholics, under the leadership of Henry Scheffer and Charles Schmeider, purchased the Second Presbyterian Church, corner of Washington and Spruce Streets, for $2,500. On Thanksgiving Day of that same year, Bishop P. J. Baltes dedicated the Church of the Holy Ghost and installed Father F. A. Marks as pastor.

That building was destroyed by fire on September 19, 1884, and the following year a brick church, of Gothic style, was erected on this same site. Shortly after, a school was added.

The church underwent remodeling in 1918, after a storm had blown off the steeple. The school was abandoned in 1924. The last major work on the old church was done in 1947 when the roof on the tower and church was replaced, the inside tower and bell chamber rebuilt and new altars, doors and floor were added.

In September of 1956, Holy Ghost School reopened in the new brick structure on the southeast corner of Washington and Pine.

In 1963, the rectory was transformed to the former Manning property at 306 North Washington Street. The adjoining property, which was later to become the site of the present new church, was purchased the following year.

Within a few months of the appointment of Father Robert Heintz, in November of 1967, an advisory council was established. The group soon concerned itself with the building of a new church. After consultation with the Bishop, a parish-wide campaign to raise funds for the new church was organized in October 1969. A goal of $250,000, to be collected over a period of three years, was set. $193,000 was pledged. The firm of Keeney and Stolze, Architects, was contracted to propose preliminary plans. The general drawings for the structure were ready for the beginning of the campaign. Bids for the building were opened on December 15, 1970, and contracts were awarded as follows:

The new Church is situated on the west side of Washington Street directly across from the elementary school, built between an existing residence on the left corner and attached directly to the rectory with an office connection.

The main problem facing the architect was to design a new church to seat five hundred people on a lot measuring 150 feet wide on Washington Street and 125 feet in depth. The challenge was to design such a building which could be completed for less than $300,000.

To provide the needed seating capacity, it was necessary that the building be either a square in plan or an adaptation of the square. The octagon shape was selected, with the main entrance facing Washington Street.

As the building was “hemmed in” by the residence on the left corner lot and the rectory on the right side, it was decided to give extreme loft to the nave so that the building’s character would not be lost and to give to the building the elegant dignity of a high pinnacle roof crowned at the top with a skylight and cross. The intersection of the wood arches rising in place from the octagon shape to the apex of the skylight is a vertical distance of some 54 feet above the nave floor.

The main entry to the church is through a triangular faceted glass arch with the side legs of the triangle starting at 9 inches above grade and rising majestically to the apex of the roof. An open Bible is displayed in the vestibule.

All floor areas of the church are carpeted. Seating is arranged on three sides of the Altar of Sacrifice in close proximity to the celebrant in accordance with the new liturgy. The Altar of Repose is located at a high elevation in order that emphasis is placed on our Lord in the Blessed Sacrament. The tabernacle is of bronze enriched with hammered and baked enamel design.

Attention is drawn to the faceted glass mural above the altar. The design is symbolic and somewhat abstract, depicting the Holy Spirit in the form of a descending dove surrounded by flames being blown in the wind. The feeling is flowing and dynamic and the colors vibrant with areas of reds, wines, and oranges again expressing this vital force of the Third Person of the Trinity. Wisdom, understanding, counsel, fortitude, knowledge, piety, and fear of the Lord, the seven gifts of the Holy Ghost given to the soul with grace at Baptism and enriched in Confirmation – are represented by seven flames in the lower left area.

The sanctuary furniture was designed by the architect and hand made by the Harding Woodworking Shop. The Altar of Sacrifice is shaped to the contour of the sanctuary. The semicircular Altar of Repose is in striking contrast. It is hewn from huge blocks of solid mahogany laminated together to form the unusual design and it is crowned with a slab of white marble.

The Crucifix above the tabernacle is the original hand carved wood corpus from the old Holy Ghost Church which has been placed upon a modern-design mahogany cross.

The three-quarter relief figures seen on either side of the altar are carved from chestnut wood, the technique used resulting in clear lines. The finish is in different tones of brown and frosted gold. Each piece is hand carved by renowned Italian artists.

The Stations of the Cross were designed and crafted by the Sisters of the Precious Blood in the Ecclesiastical Art Department of St. Mary’s College, O’Fallon, Missouri. They are hand painted in oil on a treated wood plaque. The background is done in varied shades of Prussian blue surrounding a golden yellow halo. The crosses that are seen are in a natural mahogany color.

The only natural light entering the church is from the skylight. The light colored ceiling is pre-finished six-inch-thick yellow pine decking.

As one leaves the church, the entire faceted glass wall area represents regeneration and a continuation of the theme relating to the Holy Ghost. The Greek letters “Chi” “Rho”, represent Jesus Christ; the three flames symbolize the theological virtues of faith, hope, and love, which unite the soul to God. Areas of epoxy extend out and upward to complete the entire theme. We, as Christians, leave this place of worship reaching out to one another with faith, hope, and love.

Exterior walls are of the same brick as of the pre-existing rectory. The entire roof is covered with western red cedar shake shingles.