“And He watched over me before I knew Him and before I learned sense or even distinguished between good and evil.” – St. Patrick 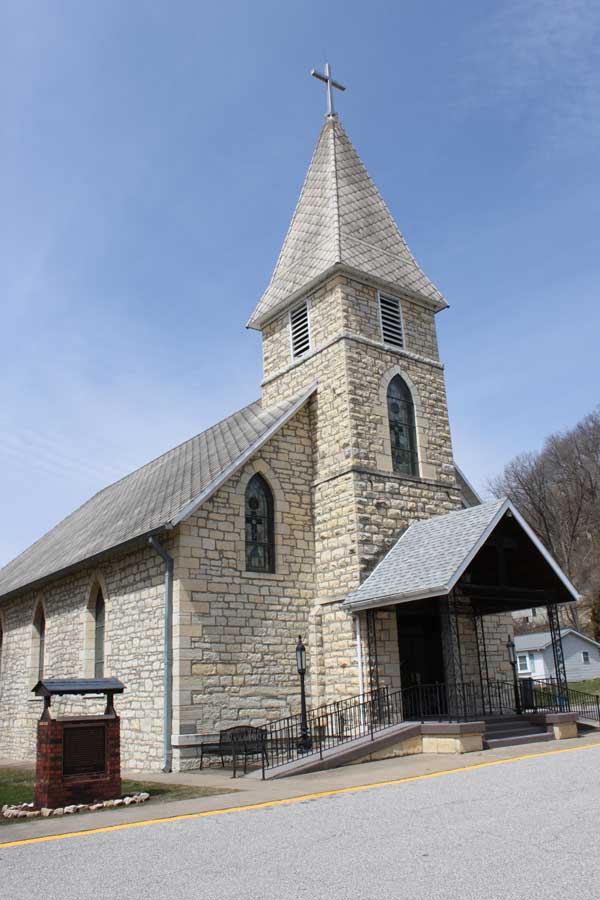 The arrival of Father Marquette, S.J. and his fellow explorers to the Grafton area in 1673 is significant to the City of Grafton and the Catholic Church there; to the city because it marks the first recorded appearance of anyone in Illinois territory; to the church because these men were Catholics, one of them, Father Marquette, a priest. Can we doubt that, as Father Marquette went ashore on the Illinois River, his first though was to offer thanks to God for their safe and successful journey? It is only fitting then that we of St. Patrick’s Church in Grafton single him out for special tribute in our historical sketch of the church.

Father Louis Hennepin, another priest explorer was very likely among the next group of white men to arrive in the Grafton vicinity and tarry at the confluence of the Illinois and Mississippi Rivers.

Many years went by before the recorded appearance of the next Catholic priest in Grafton. Perhaps there was an occasional Mass said there for the wandering Indian Tribes and the settlers migrating during the War of 1812; however, history is silent in this regard. One reliable source tells us that Father Verreydt, S.J. in 1838 had Grafton as his mission, but it was not until the quarries came into prominence about the year 1856 that we find evidence of a Catholic community in Grafton. At this time, many families of Irish descent arrived and at once the problem arose of providing a priest for them. In 1857 we know that Mass was celebrated for these laborers at the home of Sarah Dempsey by Father Manyan. In the years following, Father Carroll said Mass in the school while Bishop Juncker, head of then Alton Diocese, conducted meetings in the Methodist Church, a sign of ecumenism even in those early days.

For a time, Mass was said over the store of John Slaten by Fathers Sullivan and Laurant. Following this, Father Harty from Jerseyville held Mass in private homes and Father Bourke in the Quarry Hall in 1871. It was at this time that the Catholic community set about the monumental task of building a church. Before work could begin, a minor hurdle had to be overcome, and that was the location of the church. The Irish living in lower Grafton wanted the church located there, and the Germans living in upper Grafton wanted the church to be built in their area. A happy compromise was reached when it was decided to build the church in Upper for the sake of the Germans and name it St. Patrick in honor of the Irish.

On December 8, 1871, the Feast of the Immaculate Conception, the entire parish attended the first Mass in their church. The church was built at a cost of $5,000 with many hours of donated talented labor and native stone from the Quarry. This same building, with some alterations, still serves the community today. The rectory was built in 1872 at a cost of $2,000.

There is a striking similarity between St. Patrick’s Church in Grafton and St. James Church, “Sag Bridge” Lamont, Illinois. The two are almost identical. It is believed that many Irish immigrants who were stone masons settled in Lamont where the quarries were in operation, and during their stay there built St. James Church. Later, with the opening of the Grafton quarries, many of these families moved to Grafton and surely had a hand in building St. Patrick’s. The list of priests who served St. Patrick’s is a long and impressive one.

Under the direction and dedication of Father Patrick Morrow, a parish hall was erected and dedicated in December, 1971, 100 years after the church had been erected.